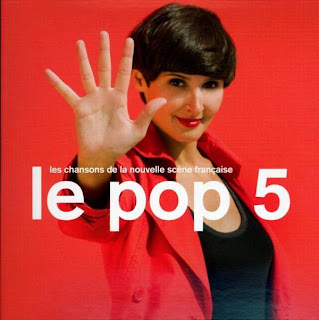 Three reviews inside, including one of the latest release in the Le Pop series.  Plus all the charts, where you'll see that Gogol Bordello is topping WRIR's world music most-played chart for the second straight week.

Brand-New Reviews
ARTIST:  various artists
TITLE:  African Pearls: Congo, Pont Sur Le Congo
REVIEW:  This is the third 2-CD set in the African Pearls series to cover the two Congos, and the second focusing on the same time period: the late 60’s and early-to-mid 70’s.  It’s a testimony to how much great music was produced then – there’s just no drop-off in quality from the preceding compilations.  During this era, the fully-mature Congolese style emerges: the Cuban influences recede to the background, leaving the multi-guitar and multi-voice interplay that characterizes Congolese music to this day.  Of course the superstars are represented: Tabu Ley Rochereau and Dr. Nico are here, and the Franco track is an unusual James Brown-influenced number (CD 1, track 4).  My favorites here are from the stable of star saxophonist and producer Verkys – his own track (1-6) is a winner, there’s a nice one from Les Grands Maquisards (1-3), and the relatively obscure Orchestre Kiam has what may be the best of them all (1-1).
REVIEWER:  Bill Lupoletti
RECOMMENDED TRACKS:   CD 1:   1   2   3   4    6         CD 2:  13

ARTIST:  Grupo Fantasma
TITLE:  El Existential
REVIEW:  Grupo Fantasma, based in Austin TX, is without a doubt one of the great live bands in the USA today, with a unique style that draws equally from salsa, cumbia, funk and psychedelic rock.  Their studio albums (this is the fourth) have so far paled in comparison to their live show.  This time they recorded in a home-built studio in an effort to capture the improvisational soul of their show, and the results are impressive.  The compositions (largely written in the studio) are more free-flowing than ever, and the soloing of guitarist Adrian Quesada and trombonist Mark Gonzales are just superb.  The sound quality is too muddy, all midrangey and lacking in attack like many home recordings, but they clearly traded off audio for ambiance here (they would benefit from a lesson from Richmond’s Bio Ritmo, a somewhat similar band, in how to make a record that matches the excitement of live performance).  But that’s a relatively minor quibble about their finest album to date.
REVIEWER:  Bill Lupoletti
RECOMMENDED TRACKS:   1   3   4   6

ARTIST:  various artists
TITLE:  Le Pop 5: Les Chansons De La Nouvelle Scene Francaise
REVIEW:  Here’s the latest installment (the seventh volume, counting one each devoted to duos and female singers) in the series that aims to keep the rest of the world up to speed on France’s nouvelle chanson movement.  Some of the material harkens back to the glory days of ye-ye pop, Serge Gainsbourg and the like, but primarily these artists are giving a French inflection to a variety of pop styles.  For example, the American band Calexico is a major influence on several tracks here: track 5 has their border sound down cold, and Marianne Dissard (track 10) is a neighbor of theirs in Tucson AZ.  Also impressive is track 15, featuring Melanie Pain of the Nouvelle Vague project stretching well beyond that band’s style.  Track 3 is by superstar (and Ms. Johnny Depp) Vanessa Paradis from a previously unreleased outside of France recording.
REVIEWER:  Bill Lupoletti
RECOMMENDED TRACKS:   3   5   10  15