What Is Global A Go-Go? 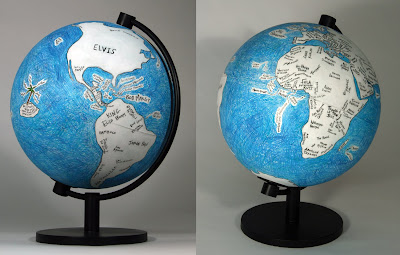 Global A Go-Go is a weekly two-hour world music radio program that I've been hosting since 2004.  It's usually produced live in the studio and can be heard on both the FM radio band and as a webstream simulcast.  It is rebroadcast on other radio stations, and it's available as a podcast as well.

LIVE RADIO
Global A Go-Go originates in the studios of WRIR Richmond Independent Radio 97.3 FM in Richmond, Virginia, USA, from which it is broadcast live every Sunday from 1 to 3 PM Eastern time USA.  A live broadcast has a certain energy and realness that's hard to duplicate in any other format -- that's what I'm aiming for each week.

WEBSTREAM SIMULCAST
In addition to broadcasting at 97.3 FM in Richmond, WRIR simulcasts its programming on a webstream.  So if you have a broadband connection and a media player, you can listen live to Global A Go-Go from anywhere in the world.

PODCASTS
There's a comprehensive online archive of Global A Go-Go programs (I'm not kidding about it being comprehensive -- the recordings go all the way back to August 25, 2004) here: radio4all.net/series/Global%20A%20Go-Go

These recordings can be downloaded for your listening pleasure, and you can receive Global A Go-Go every week as a podcast.

Global A Go-Go is all about decolonizing your ears.  My goal with this program is to expand your listening horizon: I want more people to listen to more music from outside their own country, language, culture and comfort zone.

You'll hear plenty of newly released music on Global A Go-Go, but I also feature classic and historic recordings on virtually every program.  I play music from all continents (OK, not Antarctica) -- if I tallied everything Africa would certainly come in #1 and South America would probably be #2.  And I do play music from the USA when it fits the context.

GLOBAL IS LOCAL
"World music" is one of those terms that everybody uses but nobody claims to like; I guess I'm that group too. My favorite definition of world music is that it's "local music from somewhere else." That's a pretty good description of my show as well -- most of the artists I play aren't the least bit obscure, they're just popular somewhere other than Richmond, Virginia.

In addition to local music from somewhere else, I play quite a bit of what you might call "culturally hybrid" music -- music that draws on multiple, independent cultural traditions.  Hybridity is a hot topic in academia, but my interest in it is anything but academic.  I'm simply a lifelong fan of music, and to my ears the most interesting, exciting music in the world right now reflects the ever-decreasing distance between cultures in today's world.

I hope you enjoy listening to the program, and I'd certainly be happy to hear from you.  You can leave me a comment on the site, or drop me a line via email at globalagogoradio [at] gmail [dot] com.

P.S.  If you'd like me to hear your music for potential airplay (I'll share it with other WRIR DJs as well), you can send recordings to me at this address: