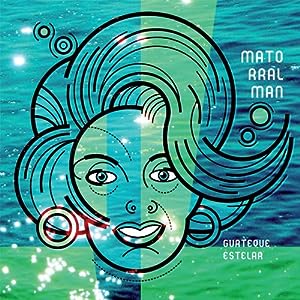 ARTIST:  Matorralman
TITLE:  Guateque Estelar (Stellar Party)
LABEL:  Nacional
REVIEW:  I recently compared the Budos Band’s sound to blaxsploitation soundtracks.  This album makes a good complement – it could be the soundtrack to another Austin Powers movie.  This Mexico City band channels the classic space-age bachelor pad sound of Esquivel (also a Mexican native) but gives it more of a muscular rock framework with pounding 4/4 drums (well, sampled drums anyway) and lots of twangy guitar a la Linc Wray or Duane Eddy.  All the tracks are instrumentals (many have sampled spoken word intros) and they’d work great as bed music for the right kind of DJ or board operator.  It’s a fun listen all the way through, stylistically very consistent with no bad tracks gumming up the works.  And I predict these guys will be able to license the hell out of this material for commercials and movies, natch.  WRIR has a bunch of DJs who like this kind of knowingly loungey thing – this one is definitely for them.  Oh, behave!
REVIEWER:  Bill Lupoletti
RECOMMENDED TRACKS:    1    2    5    7

ARTIST:  various artists
TITLE:  Roots Of OK Jazz: Congo Classics 1955-1956
LABEL:  Crammed Discs
REVIEW:  This is a reissue of a compilation that Crammed’s Vincent Kenis first put out in 1993.  It’s a remarkable collection of some of the very first recordings that Franco made as a leader when he was just 17 years old.  He’s working with guys (Vicky Longomba, Nganga Edo, Rossignol, De La Lune, Essous, Dessoin and Roitelet) who would become the core of his TPOK Jazz group; that group would go on to become the most popular and influential band in the history of African music.  These recordings aren’t merely of historical interest – the music is flat-out beautiful.  The early Congolese sound is heavily influenced by Cuban music, especially son, but you can hear the energy and excitement in every verse as these guys create a new generation of music for a new, modern Africa.  Even at this young age, Franco’s guitar playing dazzles.  This is like listening to the young Chuck Berry or Buddy Holly or Elvis for the very first time – genius right from the outset.
REVIEWER:  Bill Lupoletti
RECOMMENDED TRACKS:    1   2   7   14   18

ARTIST:  Joan Soriano (first name pronounced YO-ahn)
TITLE:  El Duque De La Bachata
LABEL:  iASO
REVIEW:  Bachata is basically the country music of the Dominican Republic.  Although it sounds old-fashioned (it’s closely related to Cuban son, which dates back to the 19th century), it’s actually quite contemporary – Dominican dictator Trujillo suppressed it (in favor of merengue) until his 1961 assassination, it didn’t reach major commercial success in the DR until the 1990’s, but now it’s massive in the country (and in New York City, the unofficial capital of the DR).  Joan Soriano is a singer and superlative guitarist who plays bachata in the rural style that predates its popularity.  These recordings, mostly made live in a Santo Domingo studio, really capture the beautiful bitterness (“amargue” is the Dominican term, with an emotional meaning that’s similar to “saudade” in Portuguese fado or Cape Verdean morno, or to “blues” in American music) that makes bachata such a compelling style.  Lovely music, superbly performed.  My favorite here is the hidden track, #13, “Vocales De Amor.”
REVIEWER:  Bill Lupoletti
RECOMMENDED TRACKS:    2    8   10   13

ARTIST:  Antibalas
TITLE:  Who Is This America?
LABEL:  Ropeadope
REVIEW:  This is a reissue of Antibalas’ 2004 release, a real landmark for American afrobeat both musically and lyrically.  Despite not having put out an album since ’07, this band is just getting more popular and admired all the time.  Part of that is because of their association with Daptone Studios, part because of their involvement with the Fela! Broadway musical, and part because of the growing interest in afrobeat.  So without any new material to release, a reissue makes a lot of sense.  And this is the right Antibalas album to reissue, as tracks 1 and 4 are two of the best afrobeat songs ever recorded outside of Nigeria, with lyrics that make Fela Kuti’s approach relevant to today’s America.  And track 4 is a great slice of 2004, right before Bush’s second election (and right before WRIR went on the air) --  a song that name-checks both Andy Fastow and Noam Chomsky.  It’s great to have a brand-new reason to play this one again.
REVIEWER:  Bill Lupoletti
RECOMMENDED TRACKS:    1    3    4