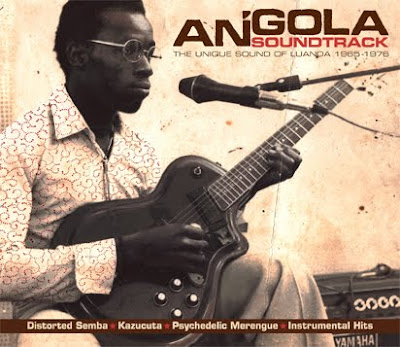 ARTIST:   various artists
TITLE:  Angola Soundtrack: The Unique Sound Of Luanda 1968-1976
LABEL:  Analog Africa
REVIEW: Release #9 from Samy Ben Redjeb’s Analog Africa is one of his best ones yet. Angolan music is often overlooked even by most hardcore African music fans, so it’s a real treat to hear these 18 tracks from the early years. Guitar is the key instrument here as it is in the Congo – many of the songs are instrumentals and the lead guitar lines are just lovely, stating and elaborating on the melody in an economical manner that is very similar to rumba Congolaise. Other major musical influences here are Cuban son, Dominican merengue, and on some of the later recordings (like tracks 15, 16 and 17) American rock and funk. Throughout, you also hear a characteristic sourness or bluesiness that’s characteristic of Portuguese fado and is probably one of the musical influences that Angola’s colonial masters brought with them. It all adds up to a unique sound that deserves much wider attention, and hopefully this beautifully-produced collection will bring that attention to Angola’s musical riches. Great music, great project.
REVIEWER: Bill Lupoletti
RECOMMENDED TRACKS:    8    10    15    16    17    18
Labels: Reviews

Where can I GET this album? I love it..

If you want to buy it from an online seller, try this search:

If you'd like to buy it from a bricks-and-mortar shop, your independent local record store will be able to order it for you if they don't have it in inventory.