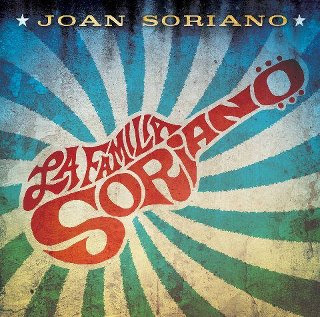 ARTIST:  Joan Soriano
TITLE:  La Familia Soriano
LABEL:  iASO
39 year old Joan (pronounced YO-ahn) Soriano is rapidly becoming the face and voice of the new generation of traditional bachata. For the uninitiated, bachata is a guitar-based style, similar to Cuban son, that’s the country music of the Dominican Republic.  Suppressed for decades, it has broken out into worldwide popularity thanks to urban, romantic artists like Aventura and Juan Luis Guerra, and to salsa DJs who spin midtempo bachatas as changes of pace in their dance-club sets.  Soriano, scion of a family of bachateros, is an extremely well-rounded musician -- he’s equally adept as a leader and a sideman, as a singer (track 1 is great all around, an excellent introduction) and guitarist (8 is a good example), as a songwriter and an interpreter of others’ material.  On his second album for iASO, he introduces us to some of his younger siblings: sisters Nelly and Griselda shine as lead vocalists on 2 and 11, respectively; brother Fernando fronts the band on 4; sister Amparo contributes choruses and her husband Julian Pacheco is the band’s bass guitarist.  The future of traditional bachata is in good hands with La Familia Soriano on the case.