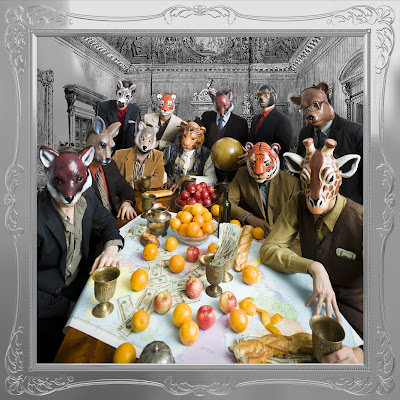 ARTIST:  Antibalas
TITLE:  Antibalas
LABEL:  Daptone
Antibalas has been the tip of the American Afrobeat spear since its founding in 1998.  Back then, an American band playing music inspired by Fela Kuti was a novelty; today most medium-sized cities in the USA have an Afrobeat ensemble. Antibalas’ response has been to double down – they’ve stripped many of the other elements from their sound, making this their most straight-forward, unadulterated, hardest-hitting recording to date.  It’s their first disc in five years; in the intervening time many bandmembers have been integral parts of Bill T. Jones’ Fela! musical.  Antibalas (“bulletproof” in Spanish) has always been an explicitly political band, and never more so than on this album, especially on tracks 1 and 2 – vocalist Amayo is one of the few singers in America who can put this kind of material across.  But the great strength of Antibalas is their ensemble playing – it has the same cohesive texture and forward thrust that Nigeria 70 and Egypt 80 had (and have – listen to Seun Kuti’s last release) – check 4 and 6 for evidence.  This is the best album to date by the finest Afrobeat band outside of Nigeria – it’s the record I’ve been waiting for them to make.