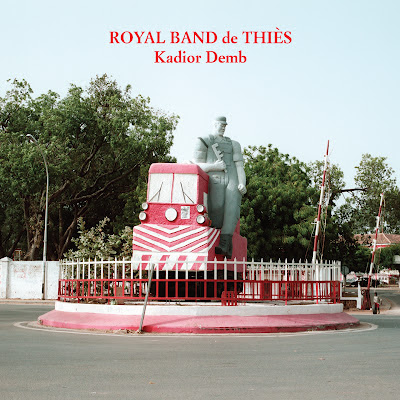 ARTIST:  Royal Band De Thies
TITLE:  Kadior Demb
LABEL:  Teranga Beat
Here’s a great never-before-released 1979 Senegalese session.  Royal Band was led by singers Mapathe (James) Gadiaga (who would go on to found Super Cayor, and was also a member of Star Band, Xalam and Super Diamono) and Adama (Secka) Seck (who still leads Royal Band to this day). The mbalax style, fusing traditional Serer rhythms with Congolese rumba and Western idioms (especially salsa and R&B), is known across the world today thanks to Youssou N’dour.  Back in ’79 the sound was still developing, and you can hear many of its key elements here, especially on tracks 1, 2 and 7.  But the rhythm section isn’t anchored by the Senegalese sabar and tama (talking) drums – rather, it’s driven by a very jazzy electric bass and trap drum duo, who make Royal Band swing like an American jazz combo.  Tracks 10 and 11 really highlight Royal Band’s jazzy sound, which is quite unlike any other Senegalese band I’ve heard.  And the recording – before-hours in a nightclub, with just two mics to a 4-track recorder – is just fabulous in the manner of a Rudy Van Gelder Blue Note session.  What a great find!
TOP TRACKS:    1    2    7    10    11
ALSO RECOMMENDED:    3    4    6    8