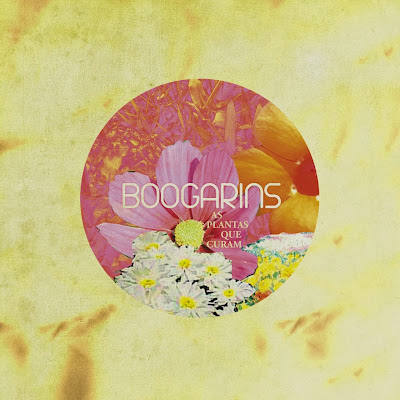 ARTIST: Boogarins
TITLE: As Plantas Que Curam (Plants That Heal)
LABEL: Other Music
There’s a major psychedelic rock revival going on right now (check out WRIR’s “Sunrise Ocean Bender” program for all the details), and here’s a DIY recording from central Brazil that’s a prime example. Boogarins are a teenage duo (fleshed out to a proper-gigging quartet post-album) from Goiania who put this project together in their parents’ basements working with borrowed equipment, technology they taught themselves to use, and their own highly fertile imaginations. Track 1 grabs you from go with a dual-guitar riff that’s right out of Television, a psych-influenced DIY band from an earlier generation. 7 has the ringing, open guitar sound of The Byrds or The Feelies, and 10 is a garage-rocker that starts out like early Kinks (or if you prefer a Brazilian reference, Raul Seixas) and moves in a trippier direction. Everyone will be tempted to benchmark these guys to Os Mutantes (equally young, same country, different era), but I don’t hear all that much tropicalia in Boogarins: try Graveola for a 21st century analogue to Os Mutantes. Tame Impala is a better comp – like them, Boogarins are young, melodic, trippy and earning buzz for all the right reasons.
TOP TRACKS:    1    7    10
ALSO RECOMMENDED:    2    3    4    5
Labels: Reviews