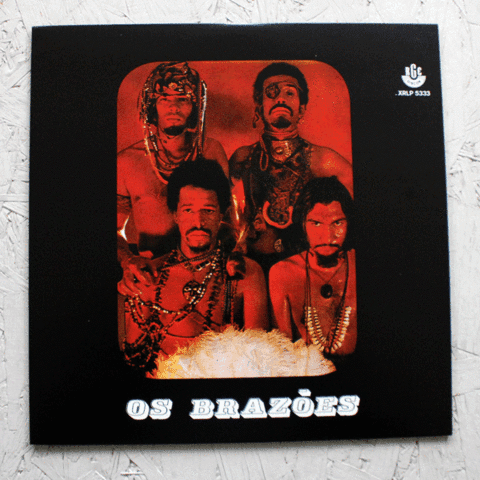 ARTIST: Os Brazoes
TITLE: Os Brazoes
LABEL: Mr Bongo
Os Brazoes were a short-lived combo from Brazil’s tropicalia era best known for their temporary role as Gal Costa’s backing band. Their one and only album, released in 1969, was largely forgotten until cratediggers rediscovered it. A copy of the original recently changed hands for $250; now Mr Bongo has put together a fully licensed reissue. This album is a superb representation of tropicalia – musica popular brasileira soaked in LSD. Most of the songs here are covers; other than their lack of songwriting, on this record Os Brazoes were every bit the equal of their better known peers Os Mutantes. Tracks 5 and 10 are perfect example of what they’re about: pop-song gems hiding underneath a lysergic surface. 7 and 12 are outstanding covers of two of the most influential songwriters of the era, Tom Ze and Jorge Ben, respectively. And 9 is their best original, with a riff undoubtedly cribbed from “Hey Jude” that devolves into what could be an Ornette Coleman melody. This one is a worthwhile discovery for fans of Brazilian music and for psych-rock heads alike.
TOP TRACKS:    5    7    9    10    12
ALSO RECOMMENDED:    1    4    6    8    11
Labels: Reviews