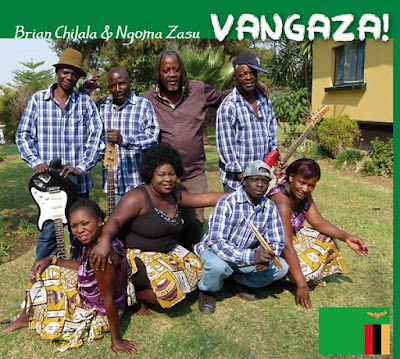 ARTIST: Brian Chilala & Ngoma Zasu
TITLE: Vangaza!
LABEL: SWP
First-world African music fans don’t get to hear enough music that’s made specifically for an in-country market. And we certainly don’t get to hear much current music from Zambia. This outstanding new release of recordings originally made between 2004 and 2008 checks both those boxes. Brian Chilala is a major figure in Zambian music, starting out in heyday of Zam-rock and now working in the tradition-based style called kalindula, based on rhythms from all parts of Zambia and carrying more than a little flavor of better-known styles from neighboring Zimbabwe and the Congo. Chilala is called “The Rebel” in Zambia, and in performance he takes on the truth-teller role of someone like Thomas Mapfumo. You don’t have to understand any of the words in his recitations on tracks 2 (which really sounds like Mapfumo) or 6 (a beautiful Alpha Blondy-like reggae arrangement) to know he’s busting people’s chops. If you love Mapfumo’s chimurenga sound, try tracks 4 and 5 as well. If Congolese rumba odemba is your thing, check out 3; and the driving, irregular meter of 8 reminds me of current Madagascar sounds. Don’t miss this little gem of a set.
TOP TRACKS:    2    3    4    5    6    8
ALSO RECOMMENDED:    1    7    9
Labels: Reviews