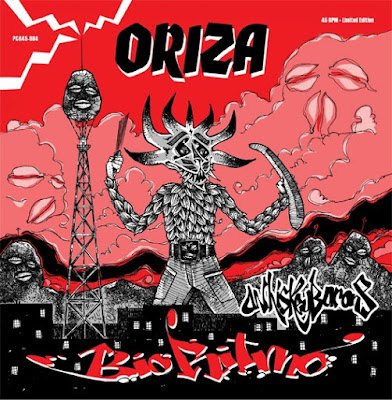 ARTIST: Bio Ritmo
TITLE: Oriza
LABEL: Peace & Rhythm
Richmond’s aces of indie-salsa throw a curveball on their new single: it’s a cumbia. “Oriza” is a Latin music standard, written by Silvestre in 1958 and made famous by Cortijo Y Su Combo with Ismael Rivera in 1960. It’s one of the first popular songs of the mambo era to explicitly incorporate Santeria (Afro-Cuban syncretic religious) elements, which would later become key building blocks of the 1970’s Nuyorican salsa dura sound. Bio Ritmo, in their inimitable way, honor this classic by subverting it. Right out of the chutes, they lay into a slow funky cumbia rhythm and keep it up until the song’s bridge, where they stop on a dime and shift into blazing son montuno. It’s a brilliant reimagining of a classic song. The B side is a remix by Boston’s Whiskey Barons, who add a subtle four-on-the-floor beat and a dubby wooziness for the dance floor. Great stuff as usual from Bio Ritmo.
TOP TRACKS:    1    2
Labels: Reviews