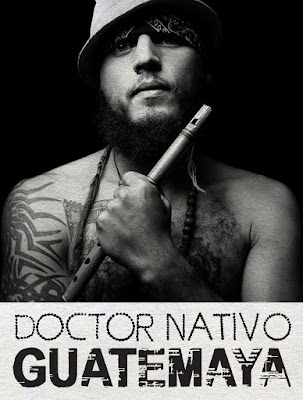 ARTIST: Doctor Nativo
TITLE: Guatemaya
LABEL: Stonetree
Ivan Duran of Stonetree Records is the producer who put the Garifuna sound of Andy Palacio, Aurelio Martinez, the Garifuna Collective and Umalali on the world music map. But Duran doesn’t live among the Garifuna – he’s based in Benque Viejo Del Carmen, Belize, on the Guatemala border, in the heart of the old Mayan empire. That’s where Juan (Doctor Nativo) Martinez found him in 2012. Nativo has been a working musician since he was 15, busking his way through Europe, India and Latin America, taking a detour to study in Cuba and settling down in Barcelona. He returned to his native Guatemala in 2010, and his music has taken a local turn with Mayan-language rapping and the use of marimba (music director Danilo Rodriguez, who doubles on marimba and trombone, is the secret weapon here). Nativo’s other template is the musica mestiza of Barcelona’s Manu Chao – the guitar strumming, staccato sing-rapping, fast tempos, insistent rhythms, horn flourishes and more will remind you than we’ve been waiting 11 years for another Chao solo album. In the meantime, this will do nicely. A superb debut album from an artist who’s simultaneously local and global.
TOP TRACKS:    1    2    4    7    10
ALSO RECOMMENDED:    3    5    6    8    9
Labels: Reviews