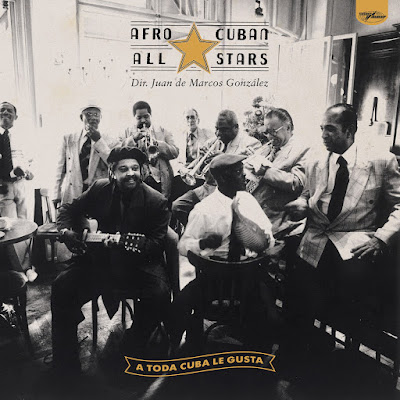 ARTIST: Afro-Cuban All Stars
TITLE: A Toda Cuba Le Gusta
LABEL: World Circuit
World Circuit continues its reissues of the famous 1996 Buena Vista Social Club (BVSC) sessions with this title. The Afro-Cuban All Stars are led by Juan de Marcos Gonzalez of the band Sierra Maestra. His goal was to revive the conjunto sound of the 1940s and 50s using four generations of players and singers, just as BVSC revives the trova and filin styles; many of the same musicians appear on both sessions. When their original idea of teaming up African and Cuban players fell through at the last minute, producer Nick Gold and guest star Ry Cooder turned to Juan de Marcos – the rest is now musical legend. Highlights of this week of music-making start with a peerless version of track 1, one of the best known guajiras, featuring a star turn by Puntillita Licea. Speaking of vocal performances, the then 79-year-old Pio Leyva fronts a killer version of 7, his 1950s hit. 2 is a big-band interpretation of the kind of material that Sierra Maestra has revived so successfully. And Juan de Marcos steps in front of the mic on 10, singing a Santeria song in Yoruba. Truly a classic recording, the closest in our lifetime we’ll get to an Arsenio Rodriguez session.
TOP TRACKS:    1    2    7    10
ALSO RECOMMENDED:    3    4    5    6    8    9
Labels: Reviews