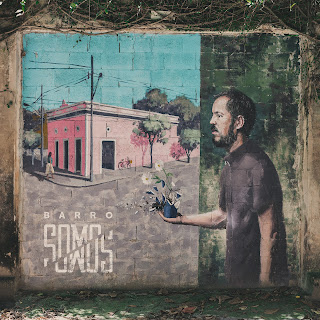 ARTIST: Barro
TITLE: Somos
LABEL: self-released
The city of Recife and Pernambuco state in Brazil’s northeast are home to one of that vast nation’s most unique music scenes. Artists like Lenine, Nacao Zumbi, Mombojo and Otto make music that’s challenging, uncategorizable and most certainly distinct from what’s happening in the cultural capitals of Sao Paulo and Rio De Janeiro. The second solo album from Barro threatens to put him into that top tier of Pernambuco artists. Start with track 5: it opens with a guitar line that could have been inspired by the Velvet Underground’s “Venus In Furs” or a hundred British folk songs, then expands into dark, atmospheric pop with a dancehall-style rap by Jessica Caitano. Similarly, each song features layers of instrumentation and layers of genres stacked one on the next like so many pancakes. There are plenty of guest stars here: Dengue from Nacao Zumbi, Chiquinho from Mombojo, and a bunch of names I don’t know. Despite the star turns, Barro’s writing, voice and sensibility stay at the center of each song. I liked his 2016 debut Miocardio a lot, but this is a quantum leap above – it’s world class thinking person’s pop music.
TOP TRACKS:    1    4    5    7    9
ALSO RECOMMENDED:    3    6    8    10
Labels: Reviews