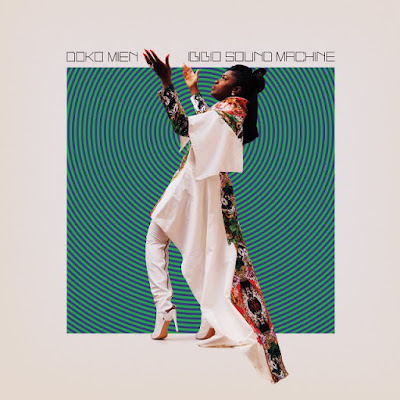 ARTIST: Ibibio Sound Machine
TITLE: Doko Mien
LABEL: Merge
The first two albums by Ibibio Sound Machine have been sensational in parts but inconsistent as a whole. On their third release, the band seems to have found the precise blend of African and first-world elements they’ve been searching for. The disc starts with a roar: track 1 rocks as hard as anything they’ve done so far, 2 has an infectious funk beat and a synth part stolen directly from Prince, and the title track (3) isn’t far behind the first two. Then they downshift to an atmospheric Afrobeat ballad (4) that’s just as compelling as the upbeat songs that precede it. Eno Williams is a compelling frontwoman, switching back and forth between English and the Ibibio language. Guitarist Kari Bannerman, a Ghana native who played with Osibisa for years, is the star instrumentalist: he plays something on every single track that makes you sit up and take notice. And the use of electronics is nicely integrated into the full band concept, rather than being a mere confection. Don’t miss 7 where Bannerman channels Robert Fripp, or 11 with its jazzy intro that segues into some hot Afro-funk. This album is the sound of a band coming of age.
TOP TRACKS:    1    2    4    7    11
ALSO RECOMMENDED:    3    5    6    8    9    10
Labels: Reviews