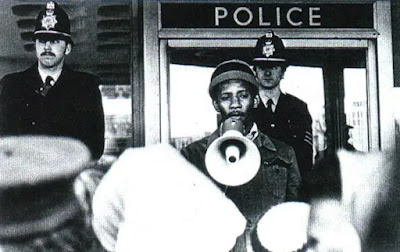 There's a lot of music I listened to in 1978 that I'm no longer interested in.  And there are a few things that are as timely and compelling now as they were then.

Linton Kwesi Johnson's poems of the 70s and 80s written about England's National Front, the Brixton Uprising and the death of Blair Peach could just as easily have been about USA 2020's Unite The Right, the Black Lives Matter movement and George Floyd.  If you're personally or emotionally involved in the movement today, when you listen to Johnson perform his poems you'll think he was forecasting your present.

This week (Monday August 24, 3:00-5:00 PM on WRIR, for two weeks afterwards at wrir.org/listen, check your local listings for airing on other radio stations, and any old time at my podcast site) Global A Go-Go presents a two-hour special on the poetry and music of Linton Kwesi Johnson, on the occasion of his 68th birthday and his recent award of the 2020 PEN Pinter Prize.