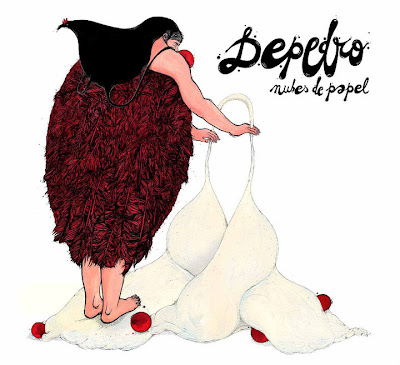 ARTIST:  Depedro
TITLE:  Nubes de Papel (Paper Clouds)
LABEL:  Nat Geo Music
REVIEW:  For those of you who have been waiting for a new album from Calexico, this will help tide you over.  Depedro is the band name for singer-songwriter Jairo Zavala, a native of Madrid and the touring guitarist for Calexico and Andrew Bird.  The album was co-produced by Calexico’s Joey Burns and much of it was recorded at Wavelab Studio in Tucson with Burns, John Convertino and other Calexicans.  Zavala’s material is folkier and more introspective than Calexico’s, but you’ll note a great sonic similarity between the two – it definitely has that cinematic borderland sound.  This could just as easily be categorized as AAA singer-songwriter instead of world, and a lot of the material here will work for WRIR's Wide Ear Folk and for anyone who like artists such as Bonnie Prince Billy and M. Ward.  This is low-key good stuff, and the cover of the Velvet Underground’s “What Goes On” (track 9) is especially surprising and outstanding.
REVIEWER:  Bill Lupoletti
RECOMMENDED TRACKS:    2    4    9    11
Labels: Reviews