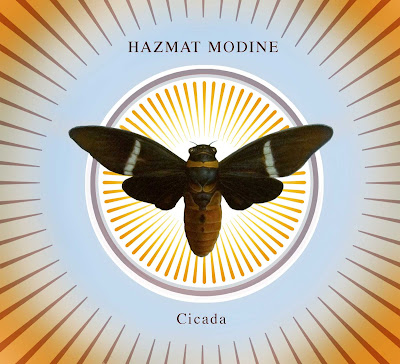 TITLE:  Cicada
LABEL:  Barbes
REVIEW:  I don’t think I’ve ever previously reviewed a record that’s as appropriate for WRIR’s The Edge Of Americana or New Orleans Roots & More as it is for Global A Go-Go.  New York-based Hazmat Modine, fronted by singer-songwriter-harmonica player Wade Schuman, is one of the most thoroughly original bands you’ll ever hear.  Their sound is rooted in old American music -- jug bands, Tin Pan Alley, blues, gospel and more -- while incorporating influences from Africa, Asia and Eastern Europe.  On their first album they collaborated with Tuvan throat singers Huun Huur Tu; here they’ve enlisted Benin’s Gangbe Brass Band, who turn two tracks (2 and 12) into a funhouse mirror version of Dixieland.  Schuman’s gravelly voice and the archaic (and in the case of Schuman’s originals, archaic-like) material might remind you of Leon Redbone (10 is a version of Irving Berlin’s Walking Stick, a staple of Redbone’s repertoire) -- but only if you could imagine him backed up by, say, the Art Ensemble of Chicago.  File under “roots,” “jazz,” “world” or whatever -- just keep it handy as you’ll be going back to this brilliant album time after time.
REVIEWER:  Bill Lupoletti
TOP TRACKS:    2    7    10    11    13
ALSO RECOMMENDED:    1    3    8    12
Labels: Reviews