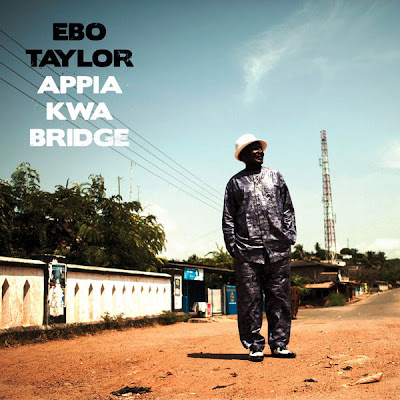 ARTIST:  Ebo Taylor
TITLE:  Appia Kwa Bridge
LABEL:  Strut
If there was an African Music Hall of Fame, Ghana’s Ebo Taylor would get in on the first ballot.  As a singer, guitarist, composer, arranger, sideman, bandleader, producer, A&R man and educator, his work is a bridge between the colonial and independence eras, from highlife to Afrobeat and beyond. Amazingly, he didn’t have an internationally distributed recording until Strut released Love And Death in 2010; they followed with the greatest-hits Life Stories last year, and now this studio album.  At 76, Taylor is still creating world-class music – his guitar playing is still strong and some of the new songs here (especially 1, 2 and 5) are easily on par with his best 70’s and 80’s work.  He’s been collaborating for some time now with the German band Afrobeat Academy; here they’re augmented by stars of Fela’s Africa 70 band: drummer Tony Allen, percussionist Pax Nicholas and guitarist Oghene Kologbo.  Taylor’s music is supremely funky and soulful like that of his friend and peer Fela Kuti, yet it’s languidly melodic and guitar-driven like the highlife music that’s his heritage.  Track 4 is straight solo guitar-and-voice highlife, a 90-year-old song given a new life by this ageless virtuoso.  Bravo!