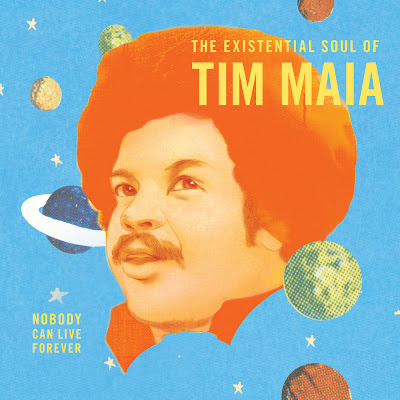 LABEL:  Luaka Bop
Here is Luaka Bop’s long-awaited compilation of the music of one of Brazil’s most remarkable stars. In the early 1970s, when Brazilian music was dividing into two camps (nationalist Tropicalia and MPB versus internationalist rock ‘n’ roll), Maia invented an entirely new mode: the black Brazilian soul man, connected to Africa and to the USA’s civil rights movement, drawing musically on the entire African diaspora.  His 1970 debut solo album arguably marks the beginning of the Black Rio movement and took the idea of “samba-soul” to a new, more funkified level.  Maia’s musical heroes were James Brown, Isaac Hayes and Barry White, and Maia’s persona and appetites were, like those of his idols, larger than life.  For American audiences, Maia’s music is unique in the Brazilian catalog -- his songs fit right in with your favorite 70’s R&B jams.  For examples, listen to Tim’s take on the “Mr. Big Stuff” rhythm (track 7), the deep funk of 3 and 8, the TSOP-meets-Rio sound of 10, or 12 which is reminiscent of Bill Withers or Terry Callier.  Great compilation of an artist you’ll want to hear.