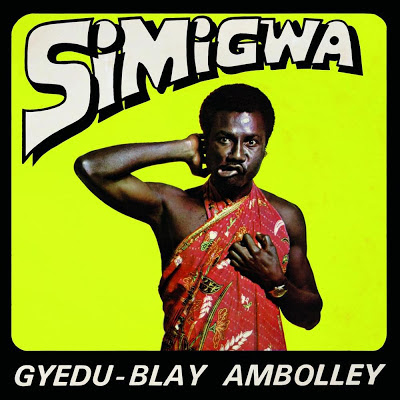 ARTIST: Gyedu-Blay Ambolley
TITLE: Simigwa
LABEL: Academy LPs
Gyedu-Blay Ambolley is one of the key artists in the development of West African popular music. His 1985 album Cut Your Coat is widely regarded as the first example of Ghanaian rap and marks the birth of the now-dominant hiplife style. Before that, he was a central figure in the Afro-funk revolution of the 1970’s that brought the influence of James Brown and other American R&B artists into African music. Here’s the first-ever authorized reissue of a complete Ambolley album (he’s on many African compilations and plenty of bootlegs as well), and it’s a stone classic – six songs, 31 minutes, all killer and no filler. This was a very popular album in its day; the original is highly collectible not because of scarcity but because most copies are just worn out. Frank Gossner (Voodoo Funk blog, Lagos Disco Inferno) managed to locate and license the master tapes. Now you can put this one on the shelf right next to Fela, Geraldo Pino, Super Etoile, Ernesto Djedje, Orchestre Poly-Rythmo -- that would be the “absolute best of West African 70’s” shelf. Bonus attraction – some of the most inexplicable liner notes of all time (from the original, of course). Play often!
TOP TRACKS:    1    2    3    4
ALSO RECOMMENDED:    5    6
Labels: Reviews