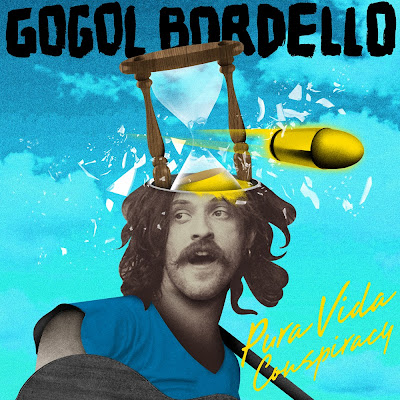 ARTIST: Gogol Bordello
TITLE: Pura Vida Conspiracy
LABEL: ATO
Gogol Bordello has a well-deserved reputation for their killer live shows, full-bore performances of authentic energy that are equal parts punk-rock and theatre. With their last two albums, 2010’s Trans-Continental Hustle and this new one, they’ve now come up with a studio approach that complements their gigs. Eugene Hutz’ songwriting is front-and-center on the recordings; he’s broadened his musical influences beyond gypsy and punk to encompass everything from mariachi (track 3) to sea shanties (5), and his lyrics are getting more Zen-like with each outing. The focus on songwriting is accentuated by the vocals (in the front of the mix) and Eugene’s acoustic guitar (which introduces nearly every song). None of this is to say that the band is simply merely backing him up – they’re still as dynamic as ever, especially violinist Sergey Ryabtsev. I think it’s time to stop referring to Gogol Bordello as a gypsy-punk act: with these last two albums they’re now making a pan-global folk-punk music that stands with the best work of Manu Chao, Joe Strummer and The Pogues, all artists they’ve cited as major influences.
TOP TRACKS:    1    3    4    5    9    11
ALSO RECOMMENDED:    2    6    7    8    10
Labels: Reviews