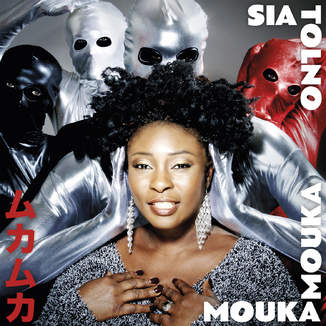 ARTIST: Sia Tolno
TITLE: Mouka Mouka EP
LABEL: Lusafrica
Sia Tolno, the Sierra Leonean-Guinean singer, will have her third international album released later this year. In advance of that, here’s a splendid five-song EP where she’s collaborating with Afrobeat legend Tony Allen, who Brian Eno has called “perhaps the greatest drummer who has ever lived.” Tolno has a powerful, gutsy voice that immediately makes me think of Angelique Kidjo; like Kidjo she dabbles in many genres but excels in the popular dance music of her native West Africa. Allen, Fela Kuti’s original drummer, is still going strong at age 73; his drumming here is just exemplary, he co-wrote four of the songs and produced all five. The sound will be familiar to fans of Allen’s work as a bandleader (count me as one of them): it’s the jazzy end of Afrobeat with moderate tempos and Allen’s remarkable polyrhythms front and center. Track 5, Tolno’s paean to African women, is a perfect example of the Tony Allen sound; it would fit onto any of his solo albums and it’s my favorite here. Track 2 is a little faster and edgier; 1 is a bit more in an Afropop vein and features an especially outstanding vocal. Excellent stuff – now I’m eagerly awaiting the album.
TOP TRACKS:    1    2    5
ALSO RECOMMENDED:    3    4
Labels: Reviews