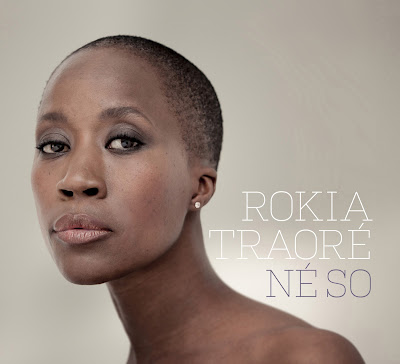 ARTIST: Rokia Traore
TITLE: Ne So
LABEL: Nonesuch
Rokia Traore, one of the world’s most original musical artists, is back with the sixth album in her 18-year recording career. Traore is the daughter of a diplomat; she has lived, worked and performed all over the world, and Mali has once again been her home base since 2009. Traore’s last album Beautiful Africa (2013) is the most direct exploration of her tangled multicultural roots – it’s one of the great African rock records. She’s reunited here with that record’s producer John Parish (best known for his work with PJ Harvey), but the direction is quite different: there’s very little rock, the scale is intimate, it’s more of a throwback to her first two albums. The title track (10) is a masterpiece, integrating spoken word segments (in French and English) about the world’s refugee crises into a beautiful arrangement featuring Mamah Diabate’s elegant ngoni lines and Stefano Pilia’s atmospheric, Bill Frisell-like guitar washes (both players are outstanding throughout). 3 shows one of Traore’s great talents: turning definitively Mande material into Western song-form. And 1 and 4 are closest to the Malian–rock hybrid that animated Beautiful Africa.
TOP TRACKS:    1    3    4    10
ALSO RECOMMENDED:    2    5    6    7    8    11
Labels: Reviews