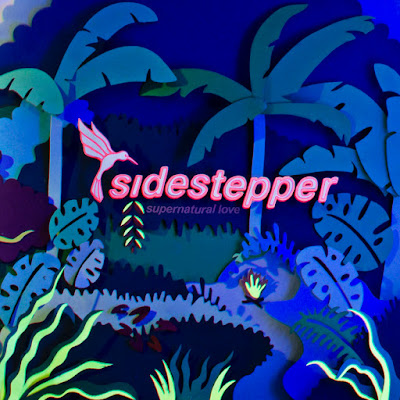 ARTIST: Sidestepper
TITLE: Supernatural Love
LABEL: Real World
Richard Blair is an English producer and engineer who decamped to Colombia in 1993 in search of new rhythms to pair with his electronic beat-making. He produced records for Aterciopelados and Carlos Vives, created the Sidestepper musical collective, and directly and indirectly created the boom in Colombian electro-cumbia driven by bands like Bomba Estereo, Systema Solar and ChocQuibTown. Now Blair says beat-making is passe: what’s new and interesting to him is creating a primarily acoustic groove. Imagine a Colombian version of Cuban deep rumba, or all-analog drum ‘n’ bass – that’s the sound Supernatural Love is after. They’re using the world’s most basic musical instruments (voices, drums, shakers, flutes), augmenting them with subtle electrical sweeteners like synth bass and dub effects, and putting it all in service of catchy, groovy material like the first single, track 4, which will get stuck in your head like the most persistent brain-worm you can imagine. Whether they’re singing in Spanish or English, the message you’ll receive is the same: this is a band that’s in touch with its true self. A wonderful recording.
TOP TRACKS:    1    4    5    6    7
ALSO RECOMMENDED:    2    3    8    9    10    11
Labels: Reviews