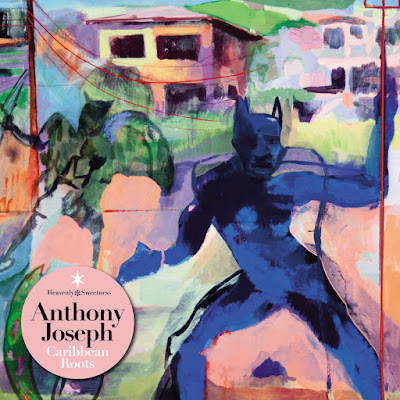 ARTIST: Anthony Joseph
TITLE: Caribbean Roots
LABEL: Heavenly Sweetness / Strut
Anthony Joseph is a Trinidad-born, London-based writer with four books of poetry and one novel to his credit; he cites as influences surrealism, calypso, jazz, the Baptist church he grew up in, and the rhythms of Caribbean speech. Joseph is also a spoken word musician: think Linton Kwesi Johnson, Gil Scott-Heron, Amiri Baraka and Oscar Brown Jr. This is Joseph’s sixth album and I think his best yet. His Dennis Bovell or Brian Jackson (to Joseph’s LKJ or Scott-Heron) here is Guadeloupian percussionist Roger Raspail, who leads a band featuring the amazing steelpan player Andy Narell that draws from sources across the Caribbean along with Afrobeat, modern jazz and jazz-rock fusion. On tracks like 2 and 8 (the latter a tribute to legendary calypsonian Mighty Sparrow) they rush forward like a runaway locomotive. The album is bookended by two long, masterful compositions (1 and 10) in which Joseph’s lyrical artistry and pan-Caribbean philosophy comes to the fore. And 9 is a mellow calypso with Joseph’s rapso-style toasting on top. A breakthrough album for this unique artist.
TOP TRACKS:    1    2    8    9    10
ALSO RECOMMENDED:    4    5    7
Labels: Reviews