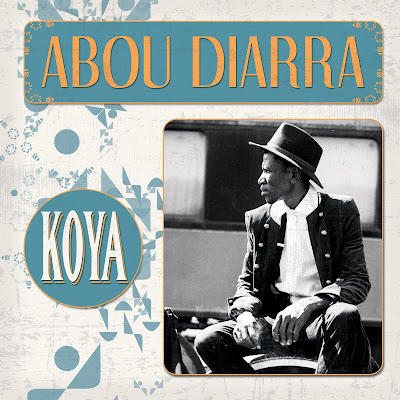 ARTIST: Abou Diarra
TITLE: Koya
LABEL: Mix Et Metisses
Abou Diarra is a musician from Mali’s Sikasso region who now lives in Paris. His main instrument is the kamale ngoni or youth harp, a secularized version of the donso ngoni (hunter’s harp) which has primarily ceremonial uses – it’s something like a cross between the small ngoni and the kora. Diarra was a student of the late Vieux Kante, widely recognized as the instrument’s great innovator. This is his fourth album; its concept is to unite Mande traditions with American blues. He’s working with music director Nicolas Repac, the man behind the wonderful Mali-meets-electro albums of Mamani Keita, and the result is another success. Diarra’s working unit the Donko Band is augmented by a series of guests: Repac is on guitar and samples throughout, Toumani Diabate sits in on kora, blues harpist Vincent Bucher excels on several numbers. Track 2 is the most directly blues-based, but it also features Simon Winse on overblown Fula flute and a lead vocal from Abou’s mother Koya. 4 takes a page out of the Amadou & Mariam songbook, 9 is a bluesy atmospheric jam, and 10 is reminiscent of the Repac-Keita collaborations. This is some top-shelf Afropop right here.
TOP TRACKS:    2    4    9    10
ALSO RECOMMENDED:    1    3    6    7    8
Labels: Reviews