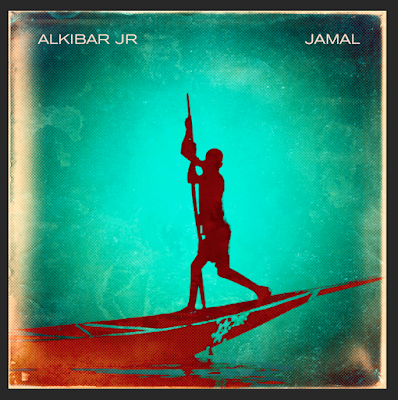 ARTIST: Alkibar Jr.
TITLE: Jamal
LABEL: Studio Mali
Before Tinariwen and the rise of la guitare des ishumar, Ali Farka Toure was the first international superstar of desert blues. From a different place (Niafunke on the Niger River near Timbuktu rather than deep in the desert) and a different ethnic group (Songhai rather than Tamasheq), Farka introduced worldwide audiences to the loping pentatonic guitar riffs of the Sahara. His sound lives on in Alkibar Jr., a band led by guitarist Diadie Bocoum, the youngest brother of Farka sideman Afel Bocoum and named after Afel’s old band. The new generation held down Niafunke’s cultural fort during the 2012 fundamentalist insurgency, “remain[ing] in the community to cultivate their rice fields, grow their beards, and discreetly write songs and practice music in their bedrooms at night.” Alkibar Jr. rocks out more than Farka’s Groupe Asko ever did (perhaps a nod to Tuareg desert blues); they even add drum kit to the traditional calabash percussion on most numbers. For the old Farka sound try tracks 3 and 6; 1 and 9 feature searing guitar and sokou (Saharan violin) solos and snappy Congolese-style drumming; and 2 is kind of the midpoint between the two approaches.
TOP TRACKS:    1    2    3    6    9
ALSO RECOMMENDED:    4    5    7    8    10    11
Labels: Reviews