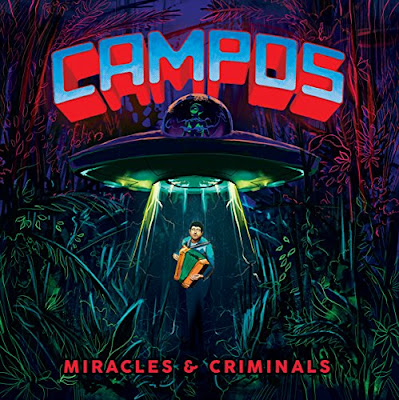 ARTIST: C.A.M.P.O.S.
TITLE: Miracles & Criminals
LABEL: Peace & Rhythm
Cumbias And More Psychedelic Original Sounds, or C.A.M.P.O.S. for short, is the latest project of ex-Richmonder Joshua Camp, best known for his bands Chicha Libre and One Ring Zero. With both of those projects currently on the back burner, Camp has donned the persona of Juan Campos and put together this kaleidoscopic double LP. The influences here run the gamut: a stream of Peruvian psychedelic-cumbia chicha runs throughout (try 3 and 7), you’ll hear songs that sound like they were meant for Chicha Libre (track 4 is a good example) or One Ring Zero (12), and there’s as much Tucson (the stunning 10 tops Calexico at its own game and 1 mines the same Latin lounge vein as Orkesta Mendoza) here as Brooklyn or Iquitos. Camp also cites the Latin Playboys, Nino Rota and Ennio Morricone as sources for the cinematic sweep of theses 31 songs and tunes which really do sound, as the press release says, “like the soundtrack for a movie Joshua Camp has always wanted to make but then it turns out it’s all in his head.” Don’t miss 5, the closest thing to a single on this compelling, delightfully off-center collection. Actually, don’t miss the whole thing.
TOP TRACKS:    1    3    4    5    7    10    12
ALSO RECOMMENDED: most of the rest of them
Labels: Reviews