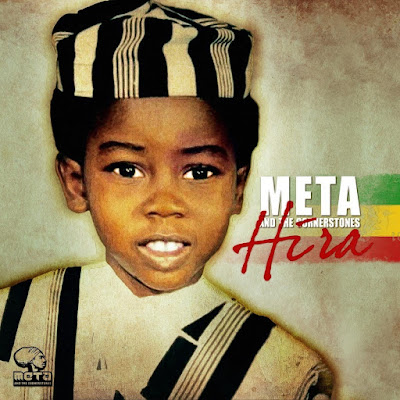 ARTIST: Meta & The Cornerstones
TITLE: Hira
LABEL: Metarize
Reggae is a Jamaican style that is now one of the world’s most cosmopolitan musical genres. Meta & The Cornerstones is a perfect illustration: front man Meta Dia is a native of Senegal now based in Brooklyn; his bandmates hail from Israel, Algeria, Japan, Jamaica and Cote D’Ivoire. On their third album, Meta & The Cornerstones make a major break-through: their previous work had its moments, but this album is fully formed and outstanding from beginning to end. The long title track (1)’s solid one-drop riddim and skanking rhythm guitar refer directly to classic 1970’s Jamaica, the piano intro is impressionistic jazz and the lyrics are about the Koran being revealed to Muhammad (Meta, like most Senegalese, is a Sufi Muslim). And that’s just the beginning in cataloging the band’s diverse musical and cultural interests: you’ll hear contemporary American reggae-rock (3), mid-century jazz guitar (8), flamenco with a star turn by Spanish diva Buika (10) and much more. Throughout and especially on 4 and 9, the ultra-tuneful melodies evoke the African reggae pioneers Alpha Blondy and Lucky Dube. Here’s the first great reggae album of 2017.
TOP TRACKS:    1    3    4    8    9    10
ALSO RECOMMENDED:    2    6    11    12    13
Labels: Reviews