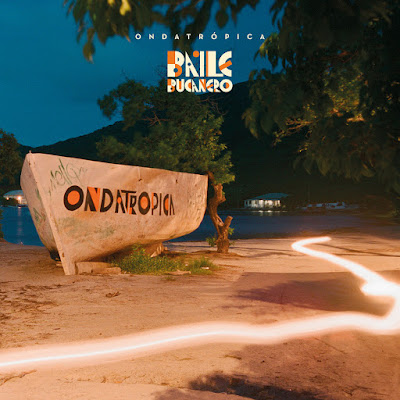 ARTIST: Ondatropica
TITLE: Baile Bucanero
LABEL: Soundway
The second album from Ondatropica, the Colombian project organized by Will (Quantic) Holland and Mario (Frente Cumbiero) Galeano, builds on the ideas of their debut, creating a pan-Colombian sound from a large mix of musicians from across that musically, ethnically and socially diverse country. They’ve enlisted the skills of 35 players and singers, hosting sessions in Bogota and on tiny Isla de Providencia in the Caribbean, featuring legends like saxophonist Michi Sarmiento and unknowns like singer Shala Boom, playing the songs of nine different composers. The variety here is tremendous: everything from fandango, the carnival brass band music of the Caribbean coast (track 6) to currulao from the Pacific coast (11), from straight-forward cumbia (10) to Afro-meets-cane-flute (7), and from a relaxed groover (2) to an intense Colombian take on dancehall (9). And the depth is just as impressive, without a single duff track in the mix. What makes the project hang together? It must be the ears of Holland and Galeano, two master producers and collaborators. This easy-going album is going to be one of the most enjoyable listens of the year.
TOP TRACKS:    2    6    7    9    10    11
ALSO RECOMMENDED:    1    3    4    5    8    12    13    14    15
Labels: Reviews