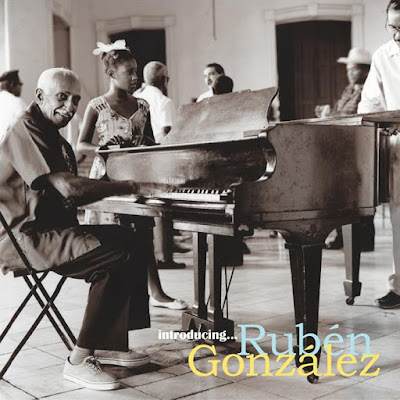 ARTIST: Ruben Gonzalez
TITLE: Introducing
LABEL: World Circuit
Here’s a reissue of then-77-year-old Ruben Gonzalez’s first solo album, 20 years after its initial release. It was the third album recorded at Havana’s Egrem Studios during an amazing two-week sprint in the spring of 1996 that also produced the Buena Vista Social Club album and the debut by the Afro-Cuban All Stars. Gonzalez’s session was unplanned – he spent so much time at the piano during the fortnight that World Circuit’s Nick Gold finally said, “Hey, while we’re here why don’t we record you too?” Ruben and bassist Orlando ‘Cachaito’ Lopez are positively telepathic – listen to them improvise together on 8 for an illustration. The five-man percussion section mostly stays in the background, ‘Guajiro’ Mirabal has several tasty trumpet solos and flautist Richard Egues of Orquesta Aragon turns 3 into a charanga, but basically this is the Ruben and Cachaito Show. Ry Cooder called Gonzalez “a Cuban cross between Thelonious Monk and Felix the Cat”; Gonzalez like Monk is forever surprising, but he plays ten notes for one of Monk’s so maybe he’s part Keith Jarrett as well. After 20 years, I had forgotten how truly brilliant this album is. Thanks for reminding me.
TOP TRACKS:    2    3    4    5    6    8
ALSO RECOMMENDED:    1    7    9    10
Labels: Reviews