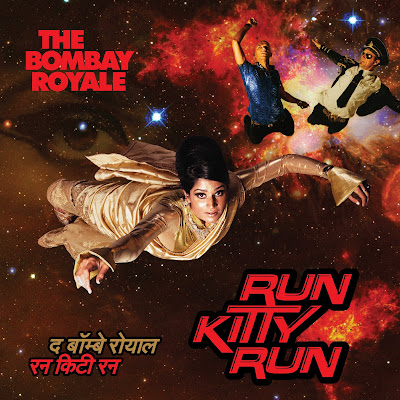 ARTIST: The Bombay Royale
TITLE: Run Kitty Run
LABEL: HopeStreet
The Bombay Royale is an 11-piece band led by saxophonist Andy (The Skipper) Williamson and fronted by two Indian-Australian singers, Parvyn Kaur Singh (aka The Mysterious Lady) and Shourov (The Tiger) Bhattacharya. (Yes, all 11 of them have nicknames – trombonist Ros Jones is The Kungfu Dentist.) They’re inspired in equal parts by Bollywood and spaghetti westerns – if you can imagine A.R. Rahman and Ennio Morricone working together, you’ve got an idea of their sound. This is their third album; it’s conceived as the soundtrack to an imaginary lost Bollywood science-fiction epic. The album sprints out of the gate with a funky rocker reminiscent of Dengue Fever (track 1), a song that sounds like Talking Heads with a sitar (2), and one that might be Bengali surf music (3). Other highlights include 8, with the bhangra-meets-hip-hop sound of Bally Sagoo and DJ Rekha, and 11 which is back in the Bengali surf mode. In between you get everything from crime jazz to electro pop to Indian disco. Unifying the whole project are the arrangements, which are over the top in the fabulous way that makes Bollywood what it is. Big fun.
TOP TRACKS:    1    2    3    8    11
ALSO RECOMMENDED:    4    5    6    7    9    10    12
Labels: Reviews