Camarao | The Imaginary Soundtrack To A Brazilian Western Movie, 1964-1974 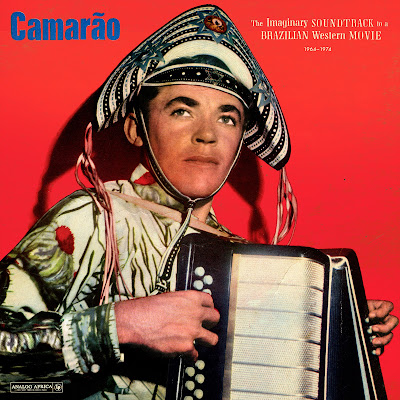 ARTIST: Camarao
TITLE: The Imaginary Soundtrack To A Brazilian Western Movie, 1964-1974
LABEL: Analog Africa
Forro is one of the indigenous musical styles of Brazil’s largely rural northeastern province of Pernambuco. In the sophisticated cities of Sao Paulo and Rio De Janeiro, thousands of miles from the northeast, forro is sometimes called “music for maids and taxi drivers,” and the rise of the Brazilian pop monoculture called MPB in the 60s and 70s nearly drove forro and other regional styles underground. Camarao is one of forro’s great modernizers; you can hear some of his best sides on this well-curated collection. His big breakthrough came when he added clarinet and brass band (trumpet, trombone, tuba) elements to the traditional accordion-triangle-zabumba (bass drum) format (itself a Brazilian analog to American Cajun music). Tracks 3, 4, 8 and 11 from 1969 and 1970 are from this period; 4 sounds like the Tijuana Brass go to Recife. A few years later, he’s back to a rawer, rootsier sound: try 7 and 15 for examples. And 10 is a stew of forro, MPB and surf guitar, all compressed into a minute and 58 seconds. Brazilian roots music at its finest right here.
TOP TRACKS:    3    4    7    8    10    11    15
ALSO RECOMMENDED: pretty much all of the rest of them
Labels: Reviews