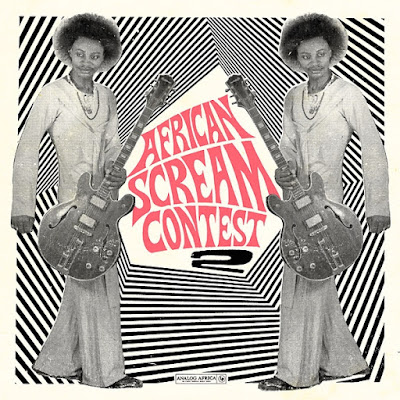 ARTIST: various artists
TITLE: African Scream Contest 2
LABEL: Analog Africa
African Scream Contest, digging deep into the funk and psychedelic sounds of West Africa’s Benin and Togo, was Analog Africa’s third release and the one that put this intrepid label on the music map. It’s become a classic, repressed more than 20 times, and now ten years later there’s finally a Volume 2. If the first volume introduced you to vodoun-funk, this one will amaze you with the depth of outstanding recordings that were made in the little country of Benin in the 60s and 70s. The key to Beninoise music is vodoun, the polytheistic religion where each of the 250 gods has his own associated rhythms; this diversity translates directly over to the local popular music. This session gets off to a flying start with Les Sympathics’ hard-edged funk (1), an old-fashioned twist by Ignace De Souza (2) and epic Afro-funk from Stanislas Tohon (3). 6 channels the sound of Benin’s most famous export, Orchestre Poly-Rythmo; it’s immediately followed by that very band’s own take on disco (7). The psych side of the Benin sound is featured on track 9, 10 is nearly Afrobeat, and 12 has the Latin tinge so common across African music of this era. Not to be missed.
TOP TRACKS:    1    2    3    6    7    9    10    12
ALSO RECOMMENDED:    4    5    8    11    13    14
Labels: Reviews