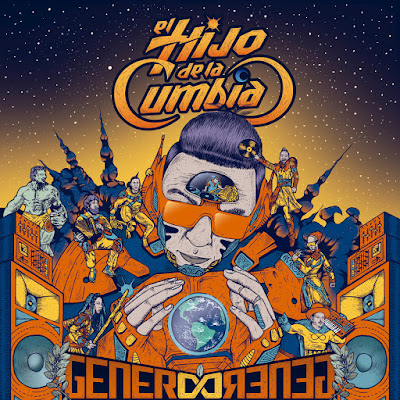 ARTIST: El Hijo De La Cumbia
TITLE: Genero Genero
LABEL: Nacional
Emiliano Gomez, who records and performs as El Hijo De La Cumbia, is an Argentine DJ and producer now living in Sweden who spins an urban, worldly musical mix based on Colombian cumbia. This new record summarizes where he’s at after 10 years of travel and research. El Hijo has produced cumbia sonidera for the Mexican audience, and his sensibility is very much in line with that genre – it’s a post-modern take on roots music. I guess you could broadly categorize El Hijo as “global bass” but I think you’d be doing him a disservice – he’s much more closely aligned with living musical tradition, just updating it for the 21st century dance floor. All eight tracks here are choice; my favorites are the four with vocals, which add another level of interest to El Hijo’s production. 1 features top-notch performances by cumbia sonidera accordionist/singer Celso Pina and reggae-en-Espanol toaster Alika; 2 is a collaboration with fellow Argentine El Rama; 3 has a star turn from breakout Cuban rapper La Dame Blanche; and 4 features Mexican Institute of Sound. If you dig the last of those artists, you should definitely check this one out.
TOP TRACKS:    1    2    3    4
ALSO RECOMMENDED:    5    6    7    8
Labels: Reviews