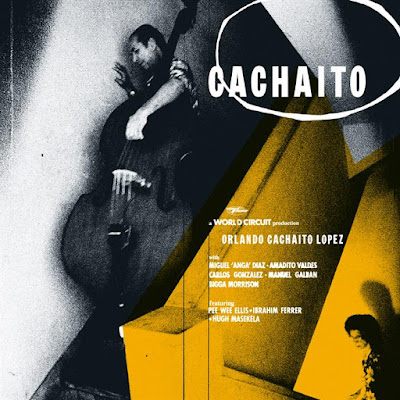 ARTIST: Orlando ‘Cachaito’ Lopez
TITLE: Cachaito
LABEL: World Circuit
World Circuit has been reissuing much of its catalog, giving you a new reason to hear this one-of-a-kind 2001 album. Cachaito was universally regarded as Cuba’s greatest bassist; he joined the popular Orquesta Riverside at age 12, went on to found the legendary Irakere, and played bass on all the Buena Vista Social Club (BVSC) sessions. BVSC producer (and World Circuit proprietor) Nick Gold put together this session to showcase Cachaito. Rather than having him back up another set of Cuban standards, this time they put the bass out front, teamed Cachaito up with unexpected musicians like Jamaican organ player Bigga Morrison, twangy guitarist Manual Galban and virtuoso conguero Anga Diaz, and added elements of dub and hip-hop to the mixes. The result on tracks like 2 and 3 is a sui generis sound (except for Galban and Ry Cooder’s 2002 Mambo Sinuendo, this album’s virtual sequel) that puts the Cuban songbook in an entirely new context. 5 sounds like J Dilla goes Cuban, 6 is based on Charles Mingus’ “Haitian Fight Song,” and 10 features a star turn by BVSC’s Ibrahim Ferrer. One of my favorite albums from the BVSC catalog.
TOP TRACKS:    2    3    5    6    10
ALSO RECOMMENDED:    4    7    8    9    11
Labels: Reviews