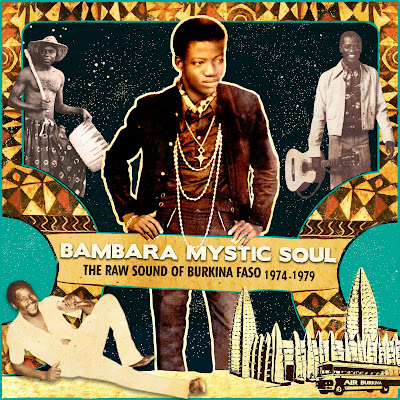 TITLE:  Bambara Mystic Soul: The Raw Sound Of Burkina Faso 1974-1979
LABEL:  Analog Africa
REVIEW:  Burkina Faso is a land-locked country that was part of French West Africa in the colonial era and achieved independence (as Haute Volta) in 1960. Burkinabe post-independence popular music is far less known that that of surrounding countries Mali, Senegal, Guinea Conakry and Cote D’Ivoire.  Nonetheless, Burkinabe artists produced some fine recordings during the 1970’s “golden age,” and these neglected sounds are superbly documented on this, the tenth release from Samy Ben Redjeb’s Analog Africa Records.  Like the music of its neighbors, Burkina Faso’s reflects the influences of Cuba (track 9 is an outstanding example) and of traditional Mande music (see track 1); and as was the case all across African, American funk (tracks 3 and 6) and psychedelic rock (16) had major impacts as well.  As usual, Analog Africa has dug deep for high quality and low name recognition -- there are six tracks from Burkina’s most famous singer, Amadou Ballake, but beyond him every artist will be new to all but the most inveterate African crate-digger.  Another outstanding compliation from Analog Africa, music that’s well worth your attention
TOP TRACKS:    1    3    6    9    16
ALSO RECOMMENDED:    all the rest of them
Labels: Reviews