Take It Easy My Brother Charles 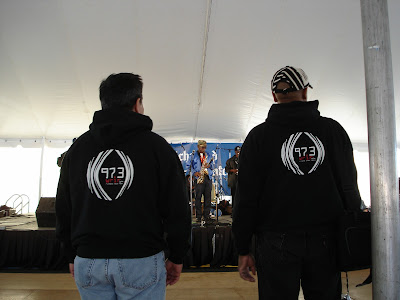 DJ Greybeard (right) is out of town this weekend at a fabulous event for which he bought his tickets long before the fund drive's dates were changed:

So Bill Lupoletti from Global A Go-Go (left) will be filling his shoes on The Other Black Music this afternoon (Sunday Sep 18, 3-5 PM), bringing you the other black music you can't hear on Richmond radio (or practically anywhere else, for that matter) and reminding you to donate during WRIR's Summer 2011 Fund Drive in order to make programs like this one possible.

I'll have a little help today from the Tim Harding Quartet, who will be playing live in the studio during The Other Black Music.  Tim, best known as the co-founder of Richmond's long-running avant-groove ensemble Hotel X, will be on saxophone with O.J. Hunter at the piano, WRIR's own Phil Pollard playing bass and Pippin Barnett manning the drums.

In between and around the band, I'll spin music from some of the artists Greybeard got to see at the Ponderosa Stomp, a few of the CDs we have available as a special premium on The Other Black Music, and other items which are 100% Greybeard approved.  It will be a party, y'all.