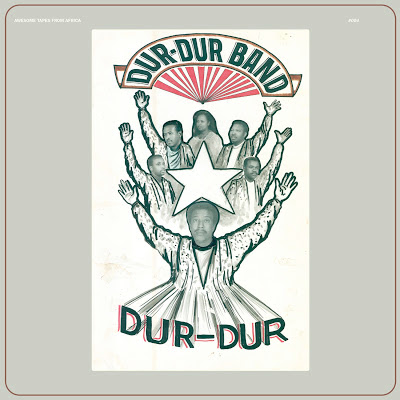 ARTIST: Dur-Dur Band
TITLE: Volume 5
LABEL: Awesome Tapes From Africa
For a variety of reasons, the cassette tape continues to be a primary medium for disseminating recorded music in Africa. If you want to hear the African music that Africans listen to, you’re most likely to find it on cassette. Brian Shimkovitz’s Awesome Tapes From Africa (ATFA) project began as a way of introducing us non-Africans to just a little bit of the 99% of African music we never get to hear, and it has now morphed into a full-fledged reissue label. Here’s an absolute beauty from Somalia circa 1987, just a few years before its civil war and the collapse of virtually all of civil society. Dur-Dur Band specializes in a groove-oriented sound that’s typically anchored by a springy disco-funk bassline (think Michael Jackson circa Thriller). Overlay that with scratchy guitar lines, show-band horn charts, Ethiopian-sounding pentatonic harmony and the superb vocals of Sahra Dawo, and you have a can’t-fail recipe: every track here is a winner, regardless of what continent or decade you’re from. Remastered from the original cassette, and yes you can buy it on cassette (CD, LP and digital download as well).
TOP TRACKS:    3    6    8    10    11
ALSO RECOMMENDED:    1    2    4    5    7    9
Labels: Reviews