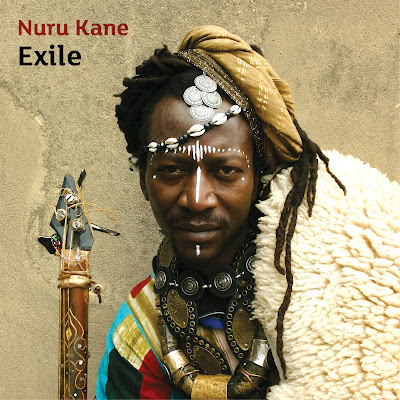 ARTIST: Nuru Kane
TITLE: Exile
LABEL: Riverboat
Nuru Kane is a Dakar-born singer, songwriter and guitarist whose wide range of musical interests are woven through this album, his second for Riverboat. Kane grew up listening to funk, reggae and blues along with the usual Senegalese influences; as an adult he was turned on by Moroccan gnawa trance music and learned to play guimbri (also known as sintir), the three-stringed bass lute that makes gnawa one of the planet’s funkiest musical styles. Kane calls his North African style “Baye Fall Gnawa” (he’s a member of the popular Senegalese Baye Fall Muslim brotherhood) and you can hear that style to excellent effect on tracks 3 and 7. The title track (2) is expressionistic, with a moody minor-key introduction that opens into a faster tempo and impassioned vocals. My favorite of all is 1, a beautiful, catchy slice of Afropop that would be a hit single in an alternate, more just universe. Like its 2006 predecessor Sigil, Exile is an outstanding, eclectic tour through the mind of a musical omnivore.
TOP TRACKS:    1    2    3    7
ALSO RECOMMENDED:    4    5    8    9    11
Labels: Reviews