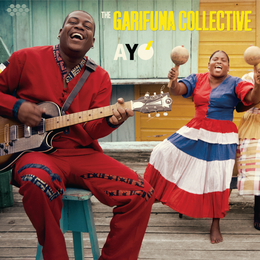 ARTIST: The Garifuna Collective
TITLE: Ayo
LABEL: Cumbancha
In 2007 Watina, credited to Andy Palacio & The Garifuna Collective, introduced listeners around the world to the music of the Garifuna people of Caribbean Central America, descendants of shipwrecked Nigerian slaves whose culture and language were close to extinct. Palacio died in 2008 but the album’s success has assured Garifuna cultural survival. Now his confederates are back with a new recording – believe it or not, it’s just as compelling as its predecessor. The band is a true collective of dozens of musicians from Belize, Honduras and Guatemala under the leadership of Belizean producer Ivan Duran, whose Stonetree record label and studio are the hub of today’s Garifuna music scene. All the music here is based on sinuous traditional rhythms and is driven by the characteristic Garifuna primero and segunda drums. But this is contemporary popular music, not a field recording – the melodies are incredibly catchy, the arrangements sophisticated, the guitar playing (much of it Congolese-influenced) virtuosic. An instant contender for 2013’s album of the year – don’t miss it.
TOP TRACKS:    3    5    6    8    10    12
ALSO RECOMMENDED:    1    2    4    7    9    11
Labels: Reviews