The Rough Guide To Psychedelic Bollywood 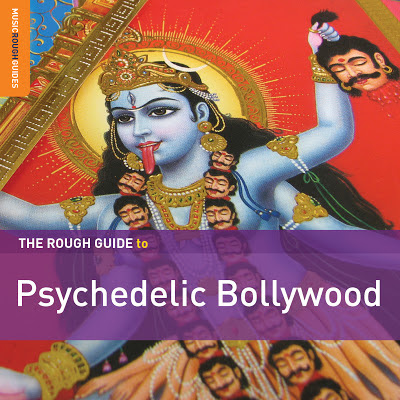 ARTIST: various artists
TITLE: The Rough Guide To Psychedelic Bollywood
LABEL: World Music Network
WMN’s new “Psychedelic” series is adding an extra twist of hipness to the venerable Rough Guide template. Here the focus is on Bollywood music of the 1970’s, a period where American and British rock and funk, legitimized by Ravi Shankar’s collaborations and borne by “hippy trail” tourists in Goa and elsewhere, became yet another influence incorporated by the all-devouring Indian movie-music industry. Music directors R.D. Burman and Kalyanji/Anandji dominate this set: they’re geniuses at incorporating any and all influences, including Shaft (track 1), James Bond (7) and Westernized sitar playing (9). Track 15, sung by Mohammed Rafi and made famous decades later in the American movie Ghost World, is an obvious standout; don’t miss Rafi’s other yeh-yeh style contribution, 10, which is just as good. And 13 is a stone classic, featuring the growling vocals of R.D. Burman himself. A good time will be had by all, and don’t forget to enjoy some freshly popped popcorn.
TOP TRACKS:    1    7    9    10    13    15
ALSO RECOMMENDED: pretty much all of the rest of them
Labels: Reviews