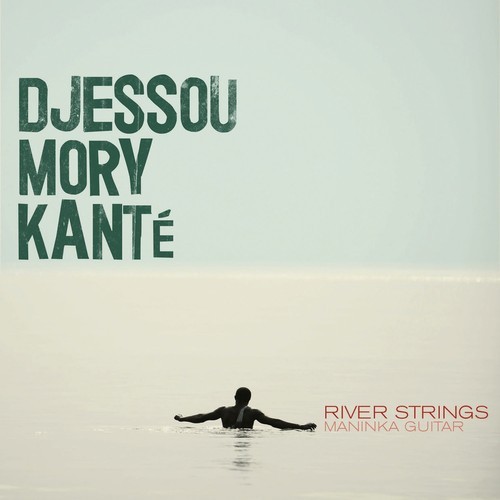 ARTIST: Djessou Mory Kante
TITLE: River Strings: Maninka Guitar
LABEL: Sterns
The Maninka music of Mali and Guinee is dominated by singers; among instruments the kora has traditionally reigned supreme, but in the last 50 years a guitar tradition has developed. Djessou Mory Kante (DMK) is a direct heir to this new tradition; his uncle introduced the guitar to Maninka music and his older brother Kante Manfila led the legendary Les Ambassadeurs from the lead guitar chair. DMK primarily works with singers (he’s frequently called on to accompany Salif Keita and Sekouba Bambino); here he stretches out on a set of guitar-led instrumentals, accompanied by percussion, keyboards, bass guitar, kamal’ngoni (hunters’ harp) and, on two tracks (3 and 6) guitar master Djelimady Tounkara of the Rail Band. DMK’s playing is superb throughout – when he gets going fast you’ll think “is that only six strings?,” but he never sacrifices the coherent melodic development that’s at the core of this style. Two tracks here (1 and 9) are instrumental versions of Salif Keita hits co-written by DMK’s brother; 4 borrows the 70s organ sound of the Rail Band and Les Ambassadeurs; and on 11 he multitracks his own accompaniment, to delightful results. Class all the way.
TOP TRACKS:    1    4    9    11
ALSO RECOMMENDED: all of the rest of them
Labels: Reviews