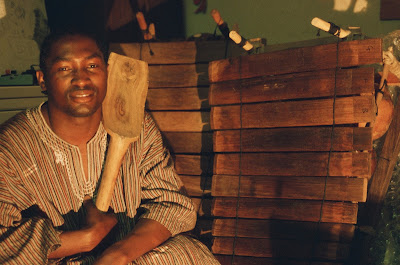 ARTIST: SK Kakraba
TITLE: Songs Of Paapieye
LABEL: Awesome Tapes From Africa
SK Kakraba is a young virtuoso of the gyil, a tuned percussion instrument related to balafon and marimba that’s native to northern Ghana. SK grew up in a Lobi community in Ghana’s Northern Region where learned his instrument from his uncle, legendary gyil player Kakraba Lobi; he moved to Accra in 1997 and then emigrated to Los Angeles in 2011. This new album, the first non-reissue to be released by Awesome Tapes From Africa, includes six solo performances by Kakraba of original tunes, traditional pieces, funeral dirges and improvisations. The gyil has 14 wooden keys suspended over calabash resonators; the former produce earthy tones, the latter allow for long sustains and complex harmonics. Adding to the unique sound, the silk from spiders’ egg sacs is stretched across the resonators – it’s the silk (paapieye in the Lobiri language) that creates the gyil’s characteristic buzzing timbre, which will immediately make you think of Konono No. 1 and the other Congotronics bands. The music is simultaneously visceral and dreamy, a similar effect to the one minimalist composers Steve Reich and Philip Glass create. Fascinating, unique music.
TOP TRACKS:    2    4    6
ALSO RECOMMENDED:    1    3    5
Labels: Reviews