Zedashe | Our Earth And Water 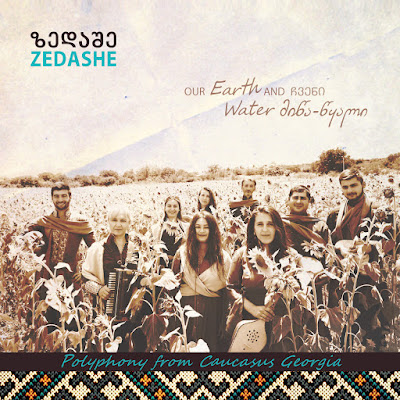 ARTIST: Zedashe
TITLE: Our Earth And Water
LABEL: Living Roots Music
Zedashe is a nine-person vocal and dance ensemble from the republic of Georgia, between the Black and Caspian Seas in western Asia. They have a Richmond connection: founder Ketevan Mindorashvili is married to ex-Richmonder John Wurdeman, a painter and winemaker, and the group will perform at this fall’s Richmond Folk Festival. Their music is built on the millennia-old local tradition of three-part-harmony polyphonic chanting. The ensemble revived liturgical music that went unsung while Georgia was part of the Soviet Union; folk songs and tunes from Georgia’s diverse regions and ethnic groups are also part of their repertoire. The harmonies have a searing, otherworldly intensity, maybe a little bit like the Bulgarian women’s choirs but truly their own unique sound. Instrumental accompaniments are sparse: generally nothing but drums (as on tracks 3 and 19) or Georgian lutes called panduri and chonguri (2 and 6) or accordion (10). The voices are the thing here – the singing is truly spectacular and the recording, made at Wurdeman and Mindorashvili’s Pheasant’s Tears winery, has the live ambiance this kind of singing needs. A one-of-a-kind experience.
TOP TRACKS:    2    3    6    10    19
ALSO RECOMMENDED:    7    11    12    13    23
Labels: Reviews