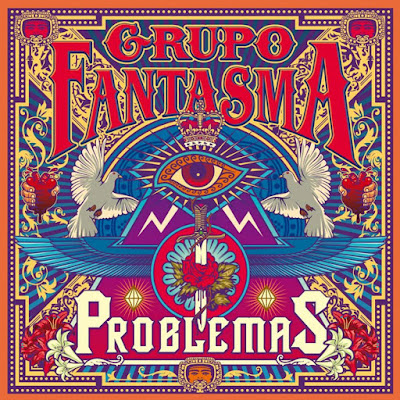 ARTIST: Grupo Fantasma
TITLE: Problemas
LABEL: Blue Corn Music
The fifth studio album by this 15-year-old nine-piece band from Austin is their best yet. Grupo Fantasma is what the Daptone guys would sound like if they grew up Tex-Mex rather than NYC ethnic: funk with Latin roots, one ear on old vinyl and the other on the most recent worldwide developments in groove-oriented music. Tracks 5 and 8 are great examples: both would sound perfect in a set of 1970s Fania Records Latin soul, yet they’re thoroughly up to date with fast tempos, rock-influenced guitar parts and horn arrangements that blast like Afrobeat. Cumbia is a major worldwide trend right now, and Fantasma is on top of it: 10 is their version of the Colombian big-band sound with some psychedelic flourishes added, and 7 puts some Peruvian chicha elements in the mix as well. Like the Daptone guys, Grupo Fantasma always plays in the pocket; 6 is an excellent illustration. I’m leaving the best for last: track 2 is right there with “Realizando” from their 2010 Grammy-winning album El Existential as their most compelling song. Best Latin combo in the USA today? Could be.
TOP TRACKS:    2    5    6    7    8    10
ALSO RECOMMENDED:    4    9    11
Labels: Reviews