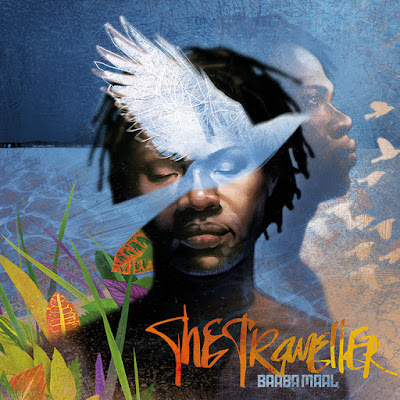 ARTIST: Baaba Maal
TITLE: The Traveller
LABEL: Palm / Marathon Artists
Baaba Maal is one of the true international stars in African music. He’s hands-down the planet’s best-known speaker of the Pulaar language, and he’s brought the music and traditions of the Tukolor people of northern Senegal and Mauritania across the globe. He’s also the owner of one of the most amazing voices in music, and I’m happy to report that at age 62, on his eleventh album, the voice is still spine-tingling. Maal has long been interested in global fusion music; for The Traveller he enlisted producer Johan Hugo of The Very Best who gives the session the drive and sheen of a modern pop album. If you’re a fan of Maal’s duets with Mansour Seck (their 1984 album Djam Leelii is a must for any African music collection), start with track 4 to hear just how well Maal’s traditional sound and Hugo’s high-tech sonics can work together. If you love Firin’ In Fouta, Maal’s 1994 pathbreaker that introduced the world to Senegalese hip hop, try the driving track 1. And if you’re in search of an ecstatic experience, Maal and Hugo deliver three in a row on 5, 6 and 7. The finale (8 and 9) sounds like it belongs on a different disc; other than that, this is two masters at work.
TOP TRACKS:    1    4    5    6    7
ALSO RECOMMENDED:    2    3
Labels: Reviews