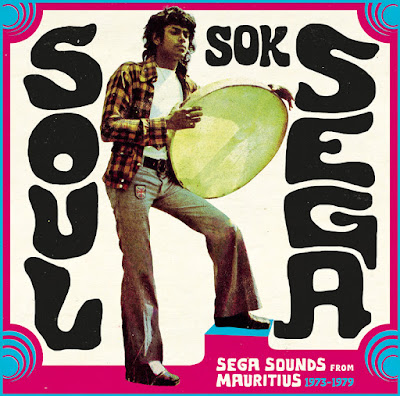 ARTIST: various artists
TITLE: Soul Sok Sega: Sega Sounds From Mauritius 1973-1979
LABEL: Strut
Sega is the most famous musical product of Mauritius, a small Indian Ocean island nation known for its biodiversity (it was the only home to the now-extinct dodo) and ethnic diversity (African, India, China and Europe are all well represented). Sega started as the music of slaves, became nationally popular in the 1950’s and arguably reached its golden age in the 1970’s, the years covered in this compilation, which is to my knowledge the first major international survey of the genre. It’s rhythmically quite unique: sets of interlocking triplets and four-beats (6/8 or 12/8 in western notation) that make the songs sound simultaneously slow and fast. You’ll hear some similarities with the music of other far-flung former French colonies like Haiti, Guadeloupe and Louisiana. And on this set, the influence of rock, funk and Bollywood are especially clear. Lots of great stuff here: 1 and 11 are two very different versions of the same song, 9 could be right out of a Bollywood movie, 16 starts like traditional sega and segues into something more modern and swinging, 18 is deeply funky, and 19 is the most trad of the bunch except for the wah-wah guitar of course. Cool!
TOP TRACKS:    1    7    9    11    16    18    19
ALSO RECOMMENDED: many of the rest of them
Labels: Reviews