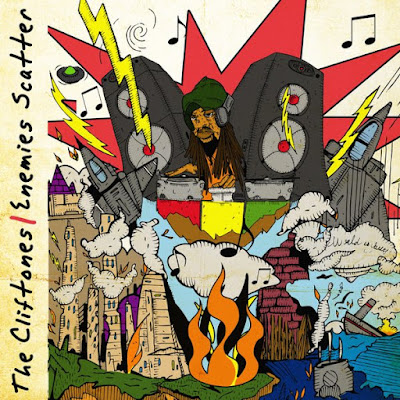 ARTIST: The Cliftones
TITLE: Enemies Scatter
LABEL: Rebel Sound
Every mid-sized or larger city in the USA has a “best reggae band in town.” The Cliftones are that band in Cincinnati, and they’re probably better than most all of their peers. Front man Deke Jones moved from Austin to Cincinnati to start a reggae band (sounds like a backwards career move, but it’s working for him), and the current 10-person lineup has been in place, more or less, since 2010. Their sound is straight-forward roots reggae played with an American accent. The current industry term for that genre is “reggae rock”; while The Cliftones most certainly can rock (they describe themselves as “roughneck roots reggae”), they stick closer to a classic Jamaican sound than do bands like SOJA or Slightly Stoopid. Try track 10 as an example: fast by reggae standards and the guitar solo is straight outta rock, but otherwise it’s pure roots. 7 is a little bit dubby, a little bit psych, and the horn section (excellent throughout) adds a visceral punch. My two favorites here are 1 and 4: the former is one of the rootsiest numbers, the latter one of the most rock-influenced. So I guess they’re just good all around. Give these guys a shot, you won’t regret it.
TOP TRACKS:    1    4    7    10
ALSO RECOMMENDED:    2    3    6    8    11
Labels: Reviews